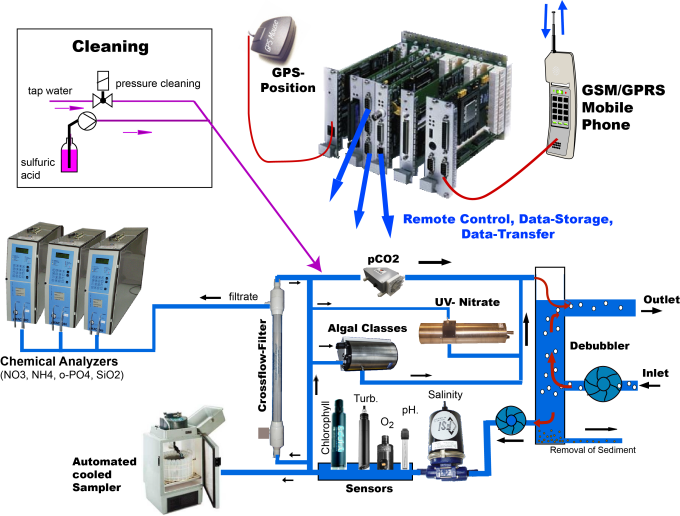 The figure shows as an example the scheme of the German FerryBox system.

The water is pumped from a subsurface inlet into the measuring circuit of multiple Sensors. A debubbling unit removes air bubbles, which may enter the system during heavy seas. At the same time coarse sand particles which may be introduced in shallow harbours and which settle and tend to block the tubes are removed as well. Coupled to the debubbler there is an internal water loop in which the seawater is circulated with a constant velocity of about 1 m/s. This already decreases the tendency for building bacterial slimes on sensors and tube surfaces. A small part of the water is filtered by a hollow-fibre cross-flow filter module for automatic nutrient analysis.

For a reliable unattended operation the system is supervised by a computer which can shut-off the system in case of sever errors and operates automatic cleaning cycles, e.g., in harbour.

Biofouling is prevented by cleaning of the sensors with tap water and rinsing with acidified water after each cruise. Sometimes clogging of the water inlet in the ship interface causes problems by debris or fish. Since all flow rates are supervised by the system in such cases an automatic pressure back-flushing cycle is initiated which clears the inlet.

In general all used FerryBox systems have a similar design. The differences are in the design of the flow-through system, the degree of automation and biofouling prevention as well as the possibilities of supervision and remote control.